The Tepa Gold Mine

Highlights of the Tepa Alluvial Gold Mine

Guskin Gold is focused on 4 opportunities in Ghana to ensure diversification of revenue, cashflow, and shareholder returns. 1) Alluvial Gold Production, 2) Hard Rock Exploration and Mining, 3) Gold Processing, and 4) Gold Export.
We identified the Nfaante Tepa Alluvial Gold Mine (“Tepa”) as a top-tier property located at Nfante after a desktop study, technical study, discussions and negotiations with the owners and technical staff we entered into an agreement.
A one-week due diligence pilot work program was carried out to estimate the alluvial gold field potential of the proposed 50-acre area.
A total of fourteen (14) test pits were mined – twelve (12) by excavator, two (2) manually with pick and shovel. All 14 test pits completed showed positive gold presence within the concentrate after washing the gravel. Six (6) of the pits were sampled in detail for estimation purposes while the other eight (8) were for a quick visual examination on the field.
An average gravel grade of 0.41 g/m³ was estimated for an average gravel thickness of 0.8 meters which cover an opened area of 33.8 acres (136,700 km²) with possible extensions TBD.
Therefore, we calculate the alluvial gold resource to be a 109,360 m³ pay gravel load with a corresponding gold content of 44,837.6g (44.8kg) for a gross production value of over $2,667 million USD (assuming gold price of $1,850 USD / ounce).

The Ensuro Group’s 50-acres property located at Nfante near Tepa is part of the Community Mining Programme initiated by the Ghana Government in collaboration with the Minerals Commission of Ghana.
The 50-acre property is located at Nfante a small town in the Subriso area of Ahafo Ano District of Ghana.
Previously the area was being exploited for hard rock gold by illegal local miners popularly called” galamseyers”.

The Concession is located at Nfante a village 28km southwest of Tepa town. (See Figure 1). The Mining Permit covers an area of 50-acres and is located on Field Sheet (0603B/1). The boundaries of the concession lie approximately within the limits of 6° 47’ 00” N and 6° 48’ 00 N” and between 2° 18’ 00” W and 2° 19’ 00” W.
The concession can be reached by a secondary road from Tepa through Manfo then to Nfante village. From Nfante to the site is by laterite road about a 5-minute drive.
Table 1: Pillar Coordinates 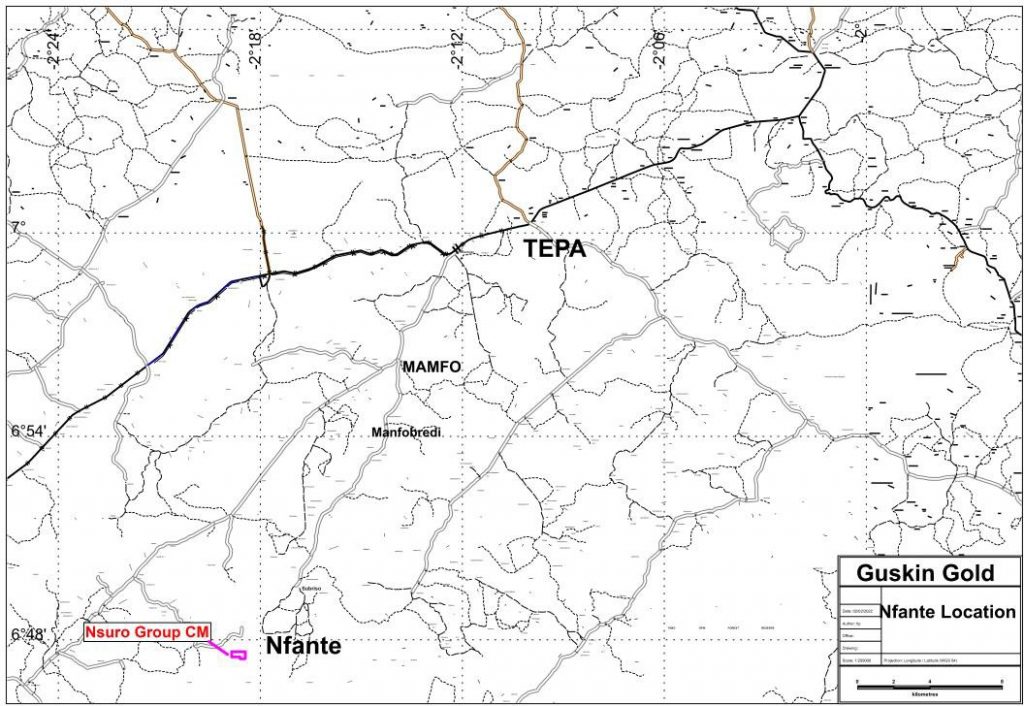 Warm and humid tropical conditions prevail in the area. The area experiences two seasons of heavy rainfall, that reaches an annual total of between 1,500 and 2,000mm. The main rainy season starts in March, reaching a maximum in June, after which the intensity diminishes. A minor rainy season occurs from September to October. Humidity is high throughout the year. Temperatures range from 23°C to 27°C in the rainy seasons. The dry season lasts from November to February with temperatures around 30°C but can get up to 35°C.
The area was originally a forest reserve, but a portion of it is depleted. The mining lease area is dominated by secondary forest vegetation that is extensively cultivated for the planting of cash crops such as cocoa and palm oil.
Typical food crops cultivated include maize, cassava, plantain, banana, and rice. The concessions border with a forest reserve to the east.

The Manfo project is located along the eastern edge of the Paleoproterozoic Sefwi-Bibiani Belt. Along with this contact, the belt is dominated by basalt and dolerite, with lesser gabbro, tonalite, and diorite. The project area is underlain primarily by metamorphosed mafic volcanic, sedimentary, volcaniclastic, and granitoid rocks.
A major northeast-trending fault corridor, approximately 3 kilometers wide, traverses the east side of the property. This fault corridor serves as the regional contact between the greenstone volcano-sedimentary package to the west and a regional synvolcanic intrusive to the east.
Mineralization at the Manfo project is localized along the major northeast-striking fault zone. Alteration and gold mineralization are closely related to increasing strain. Gold is associated with wide zones of pervasive to fracture-controlled quartz-sericite-carbonate-pyrite alteration overprinting an earlier phase of hematite alteration hosted predominantly in sheared and locally brecciated, altered granitoid rocks and to a lesser extent brecciated hematite-altered mafic metavolcanic rocks.

The alluvial gold is derived dominantly from the underlying granitoid. This is because of the fine to the medium gold presence and also the whitish sand and quartz gravel with high feldspar contents. 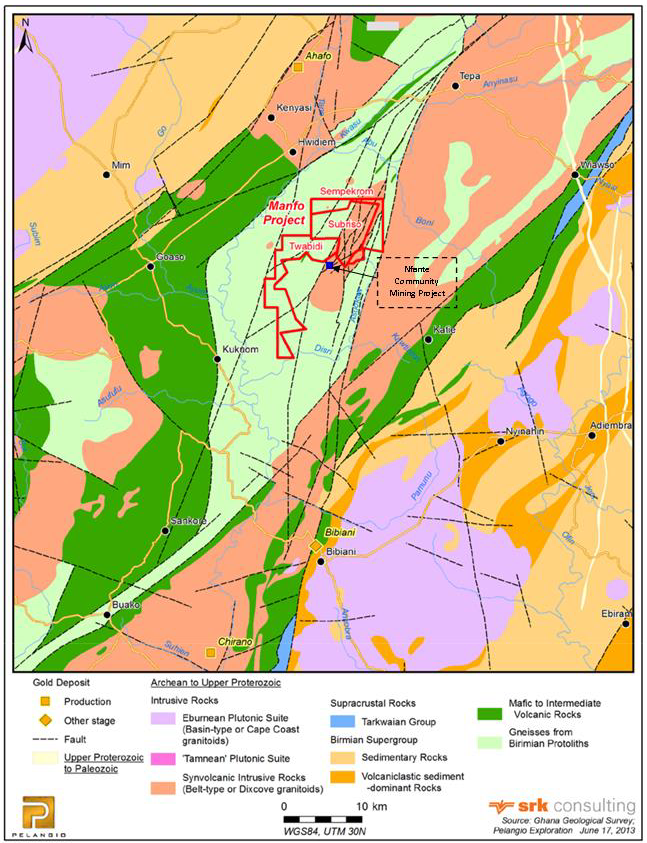 The Nfante area has a history of illegal local mining because the area was restricted to Desiri Forest Reserve. Currently, alluvial gold mining activities are being carried out by local Ghanaian companies using simple wash plants and excavators. An attempt is being made by the Ensuro Group of Companies to explore the hard rock potential of the area.
Ensuro Group of Company is at the moment trying to expand the hard rock gold potential by open pit method with heavy equipment. 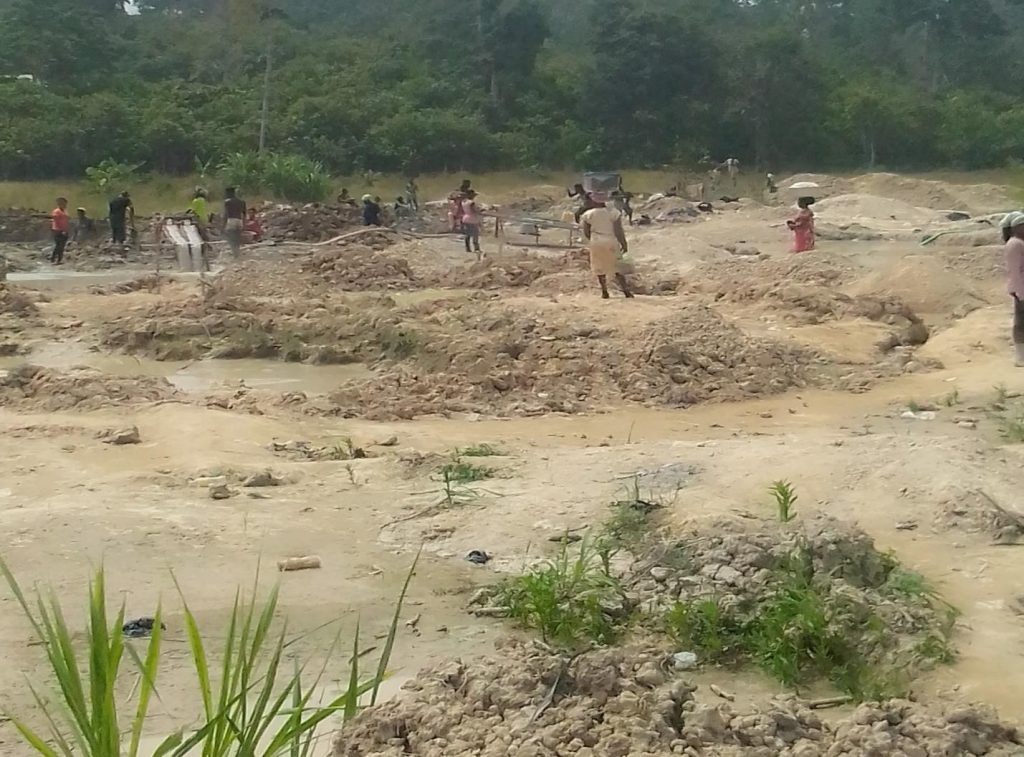 Figure 3: Alluvial Gold being exploited by the locals

A one-week alluvial test pitting program with an excavator was conducted. This was cost effective as we were able to rent the excavator, already on site, and were able to dig all 12 holes in one day. The first day was used for digging pits and a quick test on the gravel for gold presence. 14 pits were completed in total, of which 2 were dug manually. Six pits designated NPT1-NPT6 were sampled in detail for resource estimation. 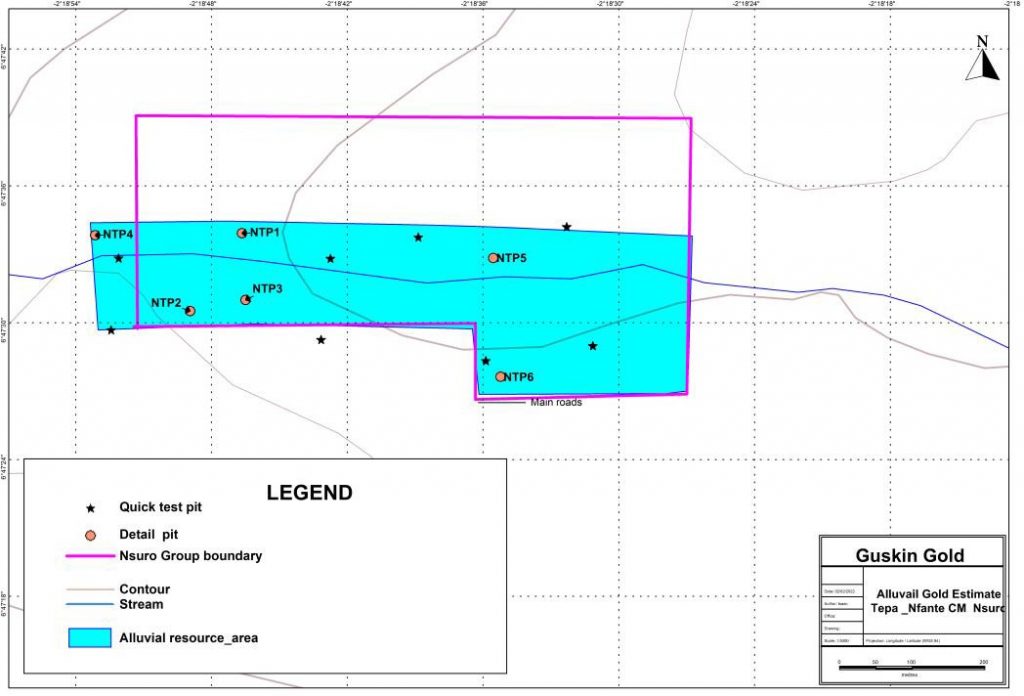 Excavator was used in digging the pit to bring the gravel out until the bedrock is reached. Insitu dimensions of the pits were not possible because the gravel layer was sandy with water so the pit walls easily caved in.
A wooden box of volume 0.125m³ was used in determining the volume washed by way of counting the number of boxes fetched for washing. A local sluice box was used to wash and get the concentrates. The concentrate is further panned in clean water to reduce the size so that gold particles can be seen and observed.
The gravel thickness from the excavated pits was measured with a tape measure and noted down for resource estimation. 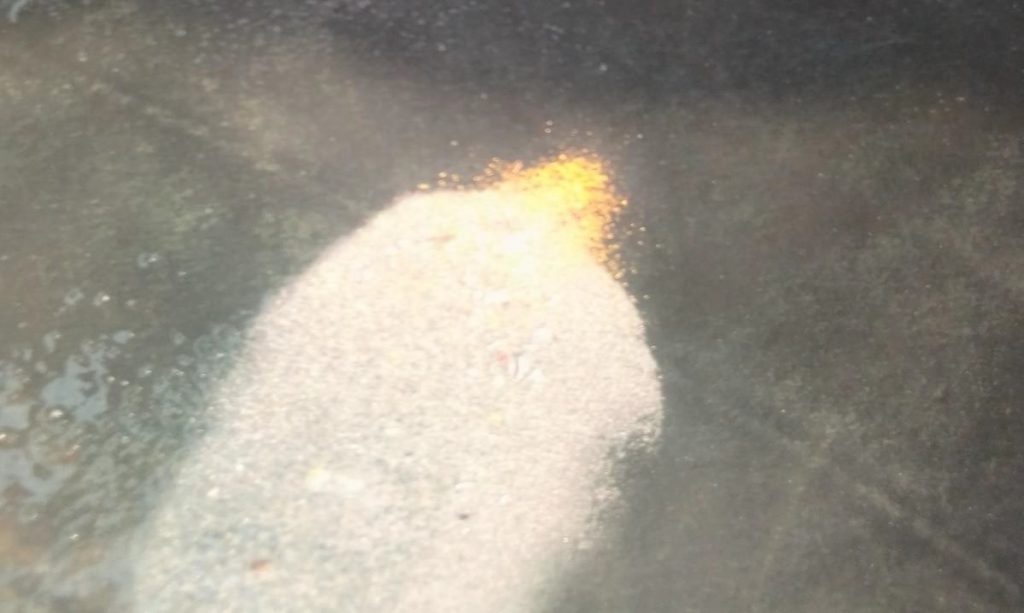 Figure 5: Concentrate reduced by panning to get visible gold

The concentrate from each of the 6 pits was amalgamated with mercury. Using a digital scale, individual gold concentrates were weighed in grams for each of the 6 selected pits (NPT1-NPT6). The grade was calculated by dividing the weighted gram of each pit by its reduced volume of 80% to cater for the swell factor of the material washed.

The area of interest at Nfante has both alluvial and eluvial gold deposit which is being mined by the locals. The alluvial consists of quartz pebbles with silty sand which is the matrix as payload. It is characterized by whitish-grey color because of the presence of felspars as predominant clay minerals. Overlying this gravel layer is sandy material which also contains fine gold. There are occasional pebbles and fragments of greenish meta-sediment which were encountered during the sampling.
The eluvial deposit is made of angular quartz fragments with clay and laterite. These occupy elevated areas as compared to alluvial found in the valley flats. The gravel thickness ranges from 0.4m to 1.0m with an average thickness of 0.8m. The average overburden thickness is 0.6m 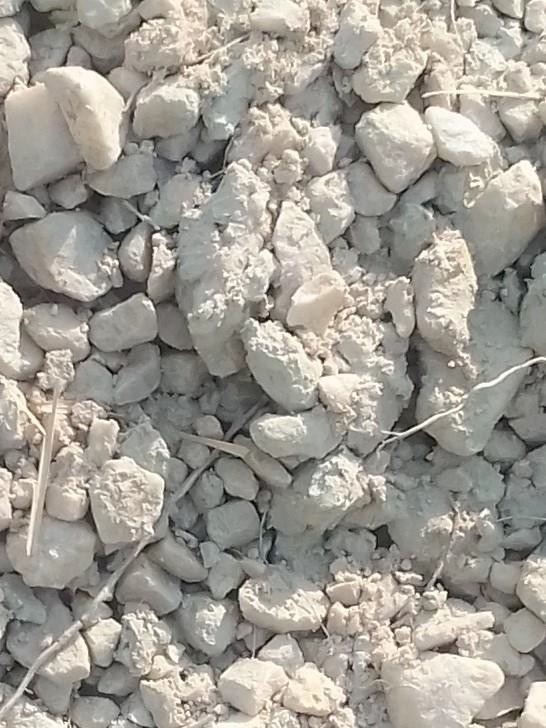 Nature of Gold and Distribution

The gold in the area is of fine to medium grain with few flowery and floating types. The distributing of the gold is found in the overlying sand as well as the gravel layers. The overlying silty sands are all part of the payload to be washed and processed for gold.
Table 2: Pit Data 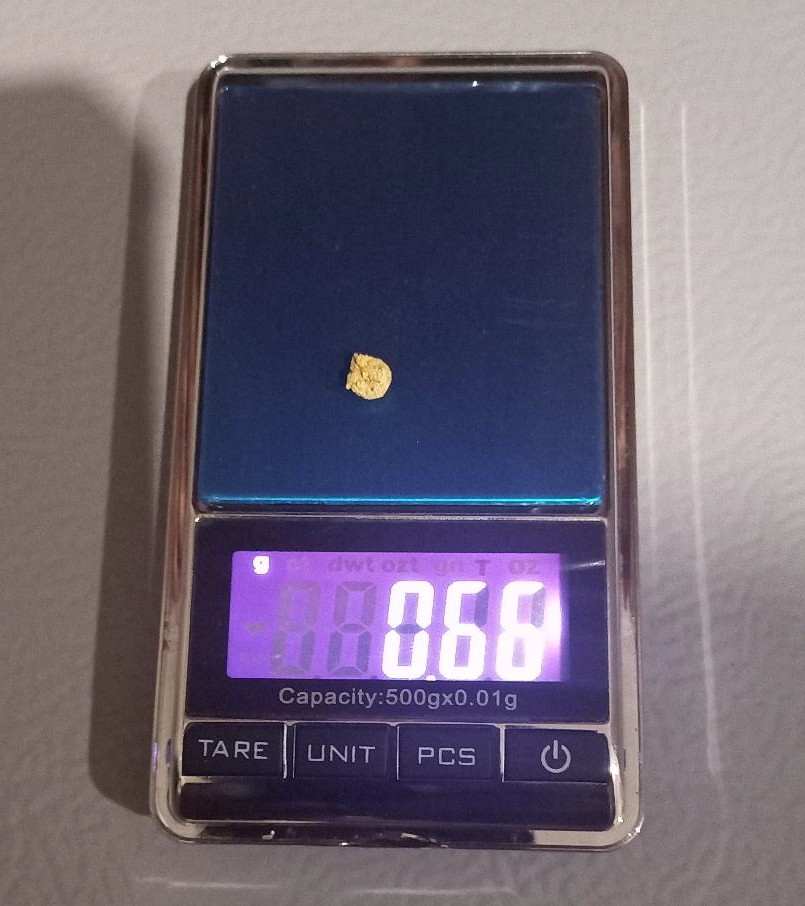 A economical resource has been established for a “quick start”, profitable alluvial gold mining project.
The Tepa Gold Mine has added an advantage in terms of compensation and overburden removal. Only the top organic soil has to be removed for production to start.
Management is currently under discussions to expand the work program to contiguous properties and as the mining activities move from “ramp up” to “run state” we feel confident our operating prowess, modern technology, and protocols will lend to our success in expanding a future footprint and additional assets and revenue streams will present themselves, including not limited to expanding our operating footprint, and gold production for sale and export.